S.C. Ports Authority is seeing signs of a moderate recovery amid the ongoing global pandemic.

S.C. Ports moved 99,431 pier containers in July, up 12% from June, according to a recent release. That points to a positive trend for the start of fiscal year 2021, but volumes remain down year-over-year.

Since January, S.C. Ports recorded 72 blank sailings, meaning a vessel does not arrive during its scheduled time or is rescheduled as a result of the pandemic’s disruption on global supply chains and business operations.

“We are encouraged by some signs of an initial rebound in our container and automotive volumes, as well as an increase in imports and a decline in blanked sailings,” S.C. Ports President and CEO Jim Newsome said in the release. “However, a more substantial recovery is dependent on the duration and intensity of the economic impacts from the pandemic and, ultimately, on a vaccine.”

Inland Port Greer received a big boost in July when Michelin North America announced it would be ramping up its use of the port by bringing in cargo from its distribution center in Woodruff.

The 3-million-square-foot Southeast distribution center is located about 10 miles away. 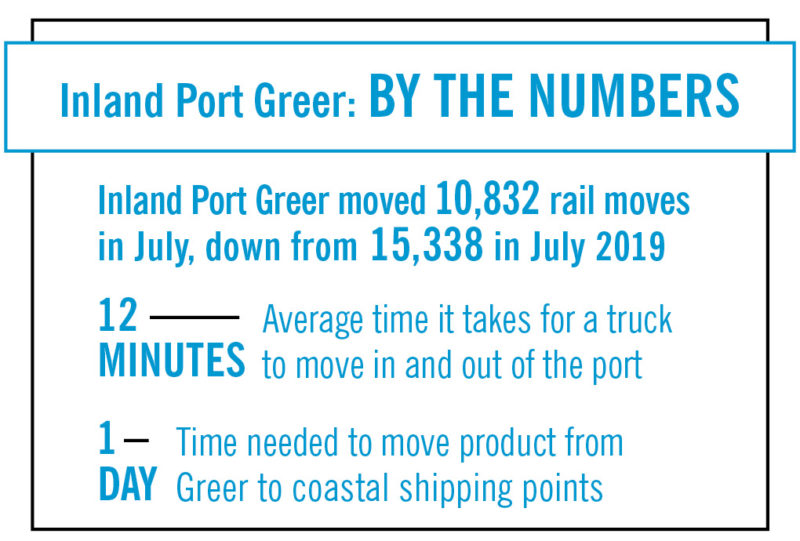 According to the announcement, Michelin will move finished tires between the Woodruff distribution center and Inland Port Greer, which connects to the Port of Charleston via overnight rail service by Norfolk Southern.

“From 2009-2018, we doubled our container volume. In 2019, we set record volumes nearly every month. The first two months of 2020 also saw record volumes before the pandemic disrupted businesses globally,” Newsome said. “I am confident that we will weather this uncertainty and come out stronger.”