The City of Greenville’s Zoning Board denied a request for a special exemption to establish a Starbucks with a drive-thru on Main Street in downtown Greenville’s West End.

This does not mean Starbucks was rejected, however, as the meeting was meant only to determine whether a drive-thru would be approved.

The denial came during the board’s meeting on Thursday, Sept. 9.

The Starbucks was planned to be located in a 0.72-acre parcel located at 911 S. Main St. just beside Fluor Field. The drive-thru was planned to be in the rear of the building, according to renderings designed by blueWATER Civil Design, and would have run alongside the train tracks separating the parcel from Fluor Field. The site would also have included 18 angled parking spaces and a patio area facing Main Street. 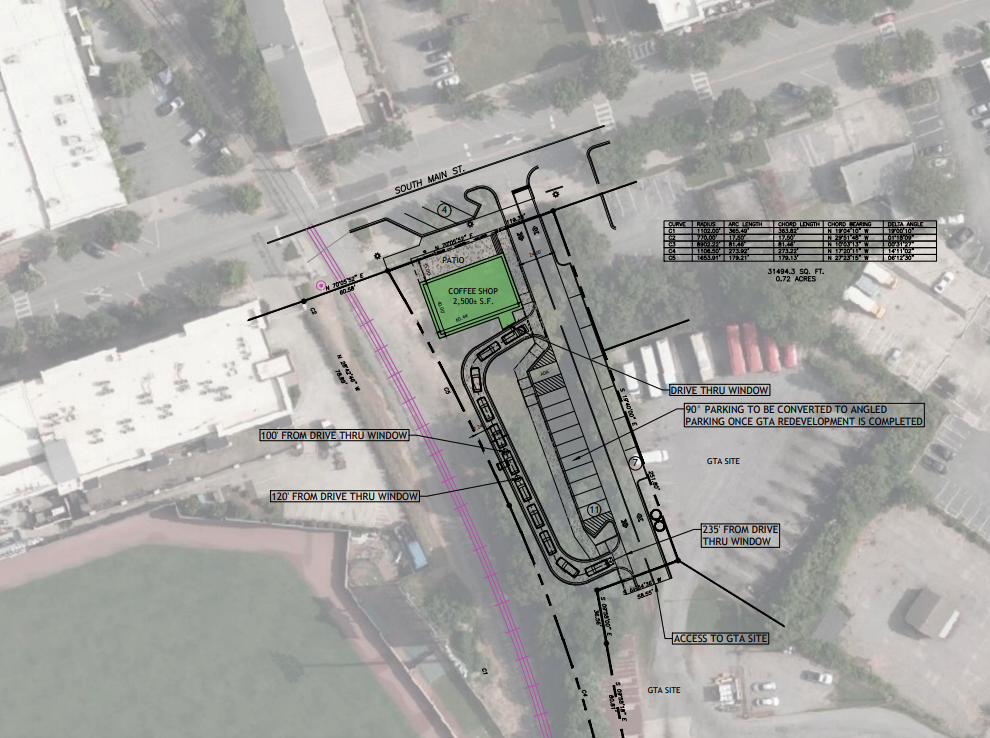 Applicant Greg Carter and representative Jason Tankersley of Centennial American Properties sent in an application to the City of Greenville’s Board of Zoning Appeals in July seeking a special exception to allow for a restaurant with a drive-thru. The restaurant was officially referred to as a “coffee shop” in the original application, although it was referred to as Starbucks multiple times by public commenters during the meeting without rebuttal from the members of the zoning board or the applicants.

Zoning board member Ken Betsch expressed concern that the drive-thru would “not be compatible with other users downtown.”

“This is clearly a suburban layout, and the plan is laid out as well as you can do it, but I don’t believe it belongs in the downtown,” Betsch said. “Certainly it doesn’t promote the connectivity we want.”

Of the five public commenters who spoke during the meeting, all were in opposition to the Starbucks location altogether but expressed added disapproval over the proposal for the drive-thru.