At a time when retail closing announcements have become more frequent than openings, the 2,800-square-foot, two-storefront building at 1296 Pendleton St. in Greenville has been fully leased to two retail tenants.

In fact, the disruption to normal operations caused by the global pandemic further confirmed that the new occupants, Revival Butchery and Arcane Remedies, needed more space to grow.

Unit A, formerly occupied by Bake Room before it moved to The Commons in late 2019, will be the new location for Revival Butchery. The custom butcher shop, which has been operating out of the commercial kitchen primarily known as Naked Pasta’s space half a block down the street, is owned by Jeremy Webb and will celebrate its two-year anniversary next month.

“We knew it wasn’t the forever place,” Webb says of sharing the kitchen at 1286 Pendleton St. “We have been more or less bursting at the seams the past year.”

Noting that the business address will change only one digit, Webb says staying in the Village of West Greenville makes the most sense as the butchery, which also has restaurant accounts, gains more traction in the market with household consumers just now learning it exists.

“People now have time to go check out the butcher shop they’ve been hearing about,” he says. 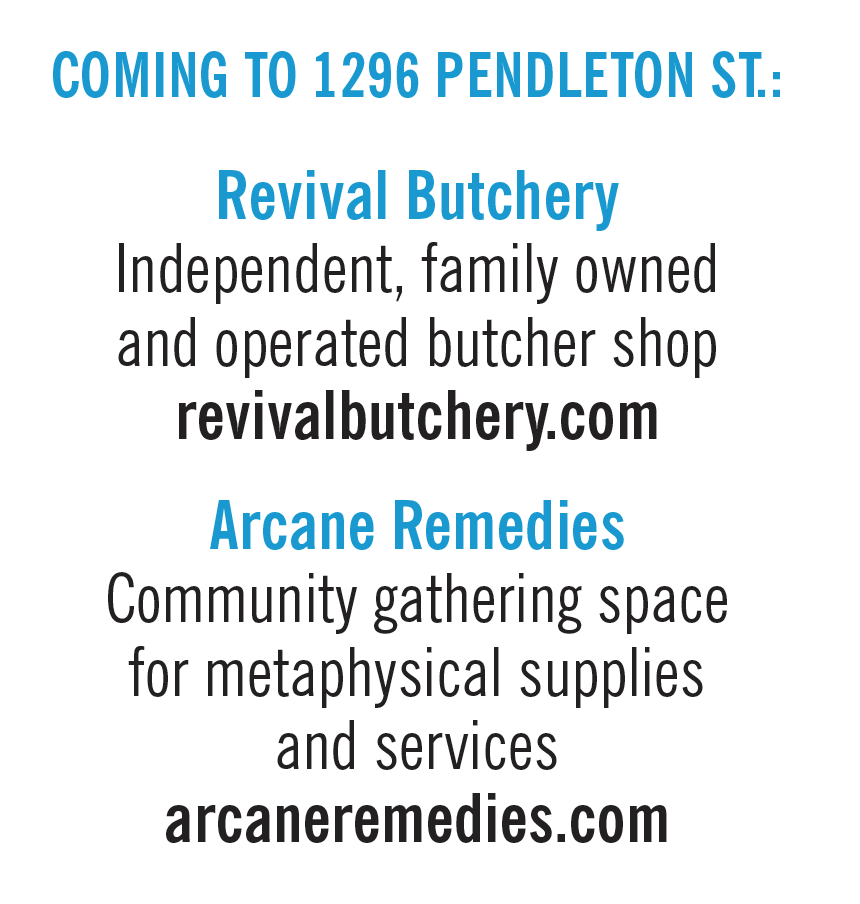 “We anticipated a busy spring to start at around Easter,” Webb says. “But it happened a month earlier. Our regulars that were coming each week are now coming once every other week and buying more to stock up.”

Practically speaking, that means more production of common items like hamburgers and fewer specialty items like the dozen or more types of house-made sausage normally on the menu.

In Unit B, Arcane Remedies, owned by Sarah Woody, will reopen as a brick-and-mortar location in June after closing up shop in March and moving to online-only sales. Previously, the business was based out of the multitenant house-turned-commercial property at 4 Smith St., also in the Village of West Greenville. The new location will nearly triple the square footage.

“It’s terrifying moving into a bigger space right now, but looking into the future it looked like the right move to give myself space to grow,” Woody says.

Arcane Remedies is a metaphysical shop and healing collective that offers herbal retail products and massage therapy, among other services. At first, Woody wasn’t sure if the Greenville community would support such a business that would be more commonly found in Asheville and other areas with a strong alternative medicine presence.

Having received the support to not only continue operating online but to grow her offerings, Woody plans to expand the lines of retail products in the new space as well as have room for a private massage and treatment room and space for communal gatherings, once those are deemed safe.

“The Village, especially now that Dobra’s open, and Bar Mars is a super cool vibe, we’re all creating a funkier vibe,” Woody says. “It reminds me a lot of West Asheville. It’s off the beaten path and not as touristy.”