As downtown Greenville and the Upstate prepare to reopen — in some cases partially, in other cases returning fully to normal operations — both landlords and tenants are asking the same question:

How will the rent be paid?

All across Upstate South Carolina, normally stable and reliable tenants are making it known to their landlords that they will no longer have the cash to pay rent on their store locations. The burden is especially onerous for small businesses. While some big name brands have also gone delinquent on last month’s rent — including Dick’s Sporting Goods, Burlington Coat Factory, PetCo, Victoria’s Secret, Staples and The Cheesecake Factory — their sheer size (coupled with some legal clout) has allowed them to hash out compromises.

Small businesses often aren’t so lucky. Some can try to negotiate; others will simply not pay, knowing landlords will have a nearly impossible time filling any vacancy with the pandemic still lingering.

“It’s really a case-by-case basis,” said Tyson Smoak, who runs Pintail Consulting in Greenville, a division of Pintail Capital Partners. Ever since the coronavirus lockdowns began, Smoak and his team have been ramping up advisory services for commercial landlords and tenants — a kind of marriage counseling for relationships that have grown increasingly fraught.

“It’s the Wild West out there,” Smoak said. “It’s forcing a lot of really tough conversations that in good times wouldn’t otherwise happen.”

Although the full impact is still tough to gauge locally, the national statistics paint a troubling portrait. About half of small businesses nationwide have still not paid their rent in full for April, according to a national poll of more than 1,000 small businesses conducted by the business social networking company Alignable. About 30% of those small businesses reported making no rent or mortgage payment at all, while 20% said they had partially paid their rent. Of those surveyed, about one quarter said their landlords or banks had offered a reduction or a deferral on those payments. The rest were out of luck.

“The only advice I can give is communication … As both tenants and landlords, be upfront and honest about what you can do.” – Carl Sobocinski, founder, Table 301 Dining Group

We spoke with both landlords and tenants operating in and around Greenville. What we found was a problem that, while not unique to the area, is more prominent given Greenville’s decades-long reputation for prosperity. While the city has weathered previous economic crises, including the 2008 housing collapse, its Teflon reputation has never faced a tougher challenge than the current moment.

From sunshine to storm clouds

At the start of 2020, the Greenville Area Development Corporation announced the previous year had been “one of Greenville County’s strongest and most rewarding years ever in terms of economic development,” with $401.8 million in capital investment announced and 2,178 new jobs with average salaries of about $50,000.

Now those promising figures have become a double-edged sword.

Deb Ayers, who runs the second-oldest retail business in Greenville, the family-owned Ayers Leather Shop  downtown, has seen Greenville pass through countless economic seasons. She said the city has been through “some real tough stuff” in the 69 years Ayers Leather Shop has been in business, but “nothing quite like this.”

Ayers, now has paid her rent in full, said she’s on the lucky side of things. She pays rent to Simpkin Investments, which is run by the Simpkins, a family Ayers has known all her life. She said she’s grateful to have that strong relationship, just in case she needs to negotiate later on.

Greenville Area Development Corporation announced that 2019 saw $401.8 MILLION in capital investment and 2,178 NEW JOBS with AVERAGE SALARIES
of about $50,000

“It’s far better than dealing with those landlords from afar, who are just out for themselves and, excuse my language, think, ‘to hell with those people renting from me,’ because they don’t care who lives or dies so long as they get paid,” Ayers said. “Lord knows there are several of those out there.”

But as a former landlord herself, Ayers empathizes with landlords who, in good faith, invested both their money and their dreams in “these wonderful properties around Greenville,” she said. But with mortgages, property taxes, employees on the payroll and other bills, she questions whether many can survive if tenants don’t pay up.

“It’s unfortunately a result of our success,” Ayers said. “As booming as things were, people thought they could extend themselves more than they would have elsewhere. A lot of these landlords were banking on Greenville being such a prosperous, desirable, top-10-this-and-that city for years to come. This virus has wiped that away. Now we’re all in limbo.”

The buck stops… where?

As a partner in a real estate venture that owns some pieces of property around downtown, including the locations of Table 301 restaurants, The Lazy Goat and Soby’s on the Side, Sobocinski knows what it’s like negotiating with the bank to find compromises like mortgage payment deferments. But as a tenant in other Table 301 locations, he also knows the strain of trying to come up with rent payments when revenue has, at least for his restaurants, dropped by more than 90%.

“The only advice I can give is communication,” Sobocinski said. “Don’t bury your head in the sand. Talk to one another. As both tenants and landlords, be upfront and honest about what you can do.”

Sobocinski compared the relationships between landlords and tenants to personal relationships. With the strain of lockdowns and uncertainty, some couples will emerge stronger than ever. Others will fall apart.

“With landlords and tenants, I don’t see there being any middle ground after this is over,” Sobocinski said. “It’ll either be a great relationship, with mutual respect and trust, or a bitter, resentful relationship that will likely crumble.”

Bo Aughtry, chairman and CEO of the commercial real estate development company Windsor Aughtry, said landlords and tenants are both in the same boat.

“The tenant’s burden outside of general overhead is rent, whereas a landlord’s burden generally is debt service,” Aughtry said. “But they affect the same end.” 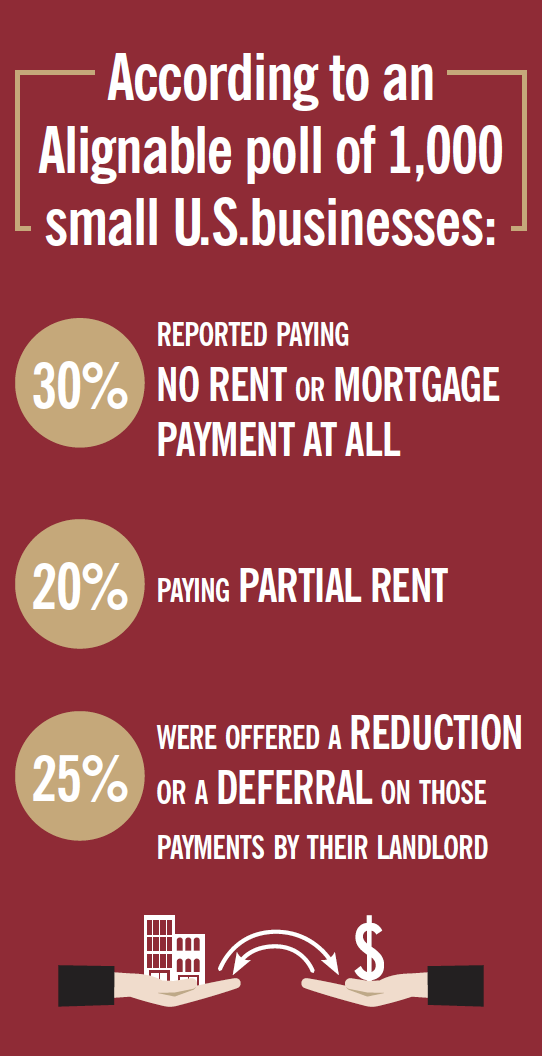 Still, Aughtry said the landlord’s payment obligations on their debt service to the bank or their lender is generally a larger portion of their budget than a tenant’s rent would be.

Windsor Aughtry, which develops upscale hotels across seven states, including the Hampton Inn & Suites in downtown Greenville, is seeing “essentially zero revenue” for its local hotels. So far, the business tenants within the hotels — namely, restaurants — have honored their rent obligations, which Aughtrey said “has certainly been a challenge for them, just as it’s been a challenge for us” to keep their obligations to the bank.

But things could be worse, he said.

Other landlords, most notably those with commercial mortgage-backed securities loans, are obligated to lenders that are more difficult to negotiate with. Accounting for about 20% of all commercial real estate mortgages today, those CMBS loans operate by packaging hundreds or even thousands of loans for commercial or residential properties.

“Nobody is directly accountable for those,” Aughtry said. “You can’t call the person in charge of the loan, because you have a servicing agent whose only function to get you to fulfill the original obligation of the loan agreement. Those are the most difficult to deal with from a change-of-contract perspective.”

Even for those with a good relationships with a bank, however, the situation for many remains untenable, Aughtry said.

“Without a change soon, it’s going to become increasingly difficult,” he said, “if not impossible.”

“A lot of these landlords were banking on Greenville being such a prosperous, desirable, top-10-this-and-that city for years to come. This virus has wiped that away. Now we’re all in limbo.” -Deb Ayers, Ayers Leather Shop

After all the years in business, Ayers’ advice to other business owners is as simple as it is timeless: “Don’t panic.”

“It’s a scary situation, don’t get me wrong,” she said. “But I still have a positive outlook. When all this is over, the same smart people and the same gracious, generous backbone of our community will still be here.”

That’s what has always seen Greenville through, she said. Economic forecasts might look bleak, but numbers alone can’t encapsulate the spirit of a community.

“I know it will be a struggle for many people,” she said. “But sad as it sounds, I hope this trauma leads to us all building closer connections, at least those of us who live here in Greenville. The people who really care about the community and who can help it come back faster are the local people. That’s always been the case.”

And if you need to talk, she said, feel free to stop on by the shop.

“Our doors are open,” she said. 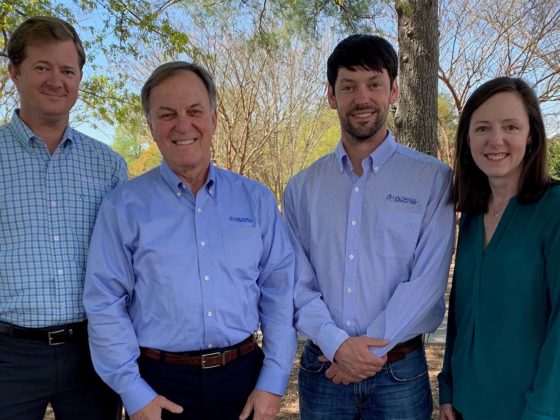 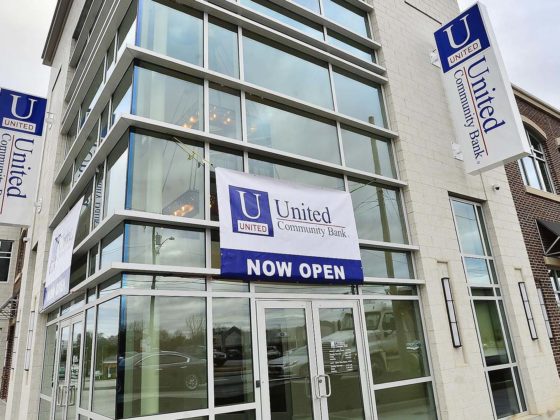 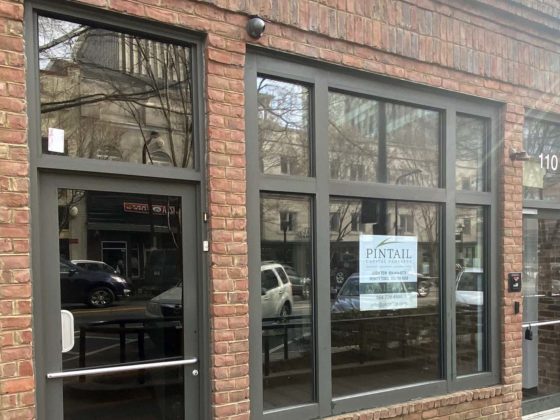