How do you keep a beard clean and smelling pleasant without irritating your skin? It’s a question Matthew “Mattman” Harris encountered when he grew a beard of his own.

Harris, who has been a part of 93.3 The Planet’s Rise Guy Morning Show for the past 18 years, said his search for a decent moisturizer always came up short.

“I’ve been growing a beard since 2008 and that’s when you kind of saw a market for it,” said Harris. “When you go to the shaving area of the store, you see shaving cream and razors. You would see balm or aftershave, but there wasn’t anything about the moisturizers or the smells or anything like that. When that stuff came into the market, I tried a lot of them and they were very cologne-based.”

After trying several brands and having rashes and other reactions on his face, Harris began to look for all-natural products. But even then, he found most of those items still had chemicals in them.

Eventually, he decided to take up making beard oils as a hobby.

“A buddy of mine who had facial hair, not a full beard, I gave him some and said, ‘Hey. Try this out and let me know what you think,’” Harris said. “Three days later, he said, ‘Hey. I want some more. I used it all.’ It sounds generic and Disney-like but it literally started off with me making it for some friends and their friends would ask, ‘Where did you get that?’ and I would make some more and that’s how it kind of rolled off.” 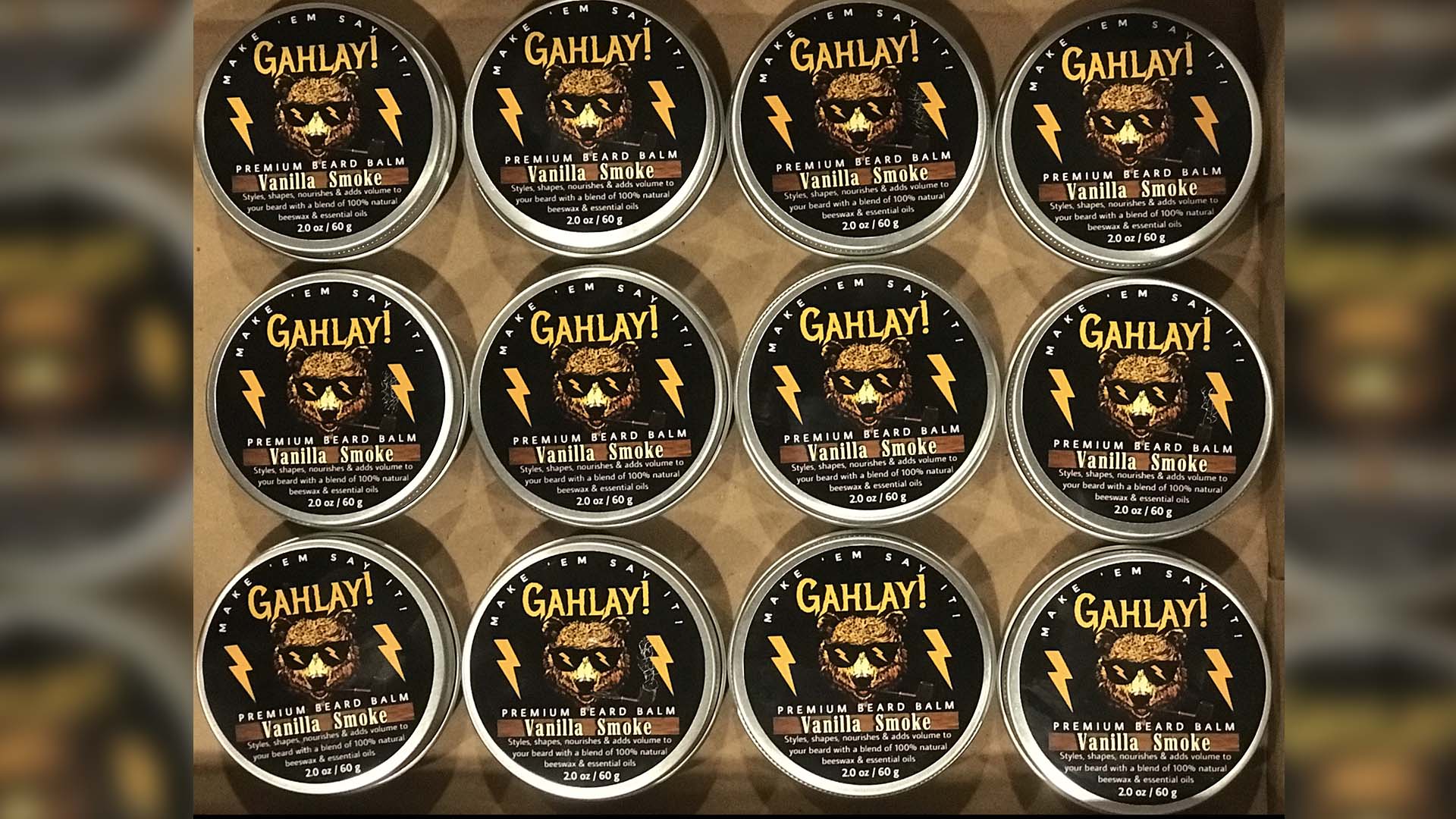 In 2019, the hobby grew into the GAHLAY! Brand Co. – chosen because Harris did not want to name the product for himself.

Wondering how to pronounce it? Watch this.

GAHLAY – pronounced Gah as in gaga and Lay is in lay down.

Since officially establishing GAHLAY!, Harris has expanded his products to include beard balms and soaps.

“It really just came about as an evolution of what do I need now to maintain this beard,” he said. “What a lot of people with facial hair don’t take into consideration is that the natural oils in your skin are covered up. It’s like an overhang on a roof covering up a bush that the sun doesn’t hit. It starts to dry out and dies while the other ones are going strong. You can moisturize your face, but if this skin under this big beard isn’t moisturized, it’s going to get dry. It’s going to flake and itch and then you have ‘beardriff,’ it’s like dandruff.”

For his soaps, Harris uses all-natural ingredients such as shea butter to moisturize and oats to give each bar scrubbing power, while his balms use a honeybee’s wax from Carrolton, Georgia as a base.

Since the balm is a styling product, Harris has seen an increased demand for it since COVID-19 started. 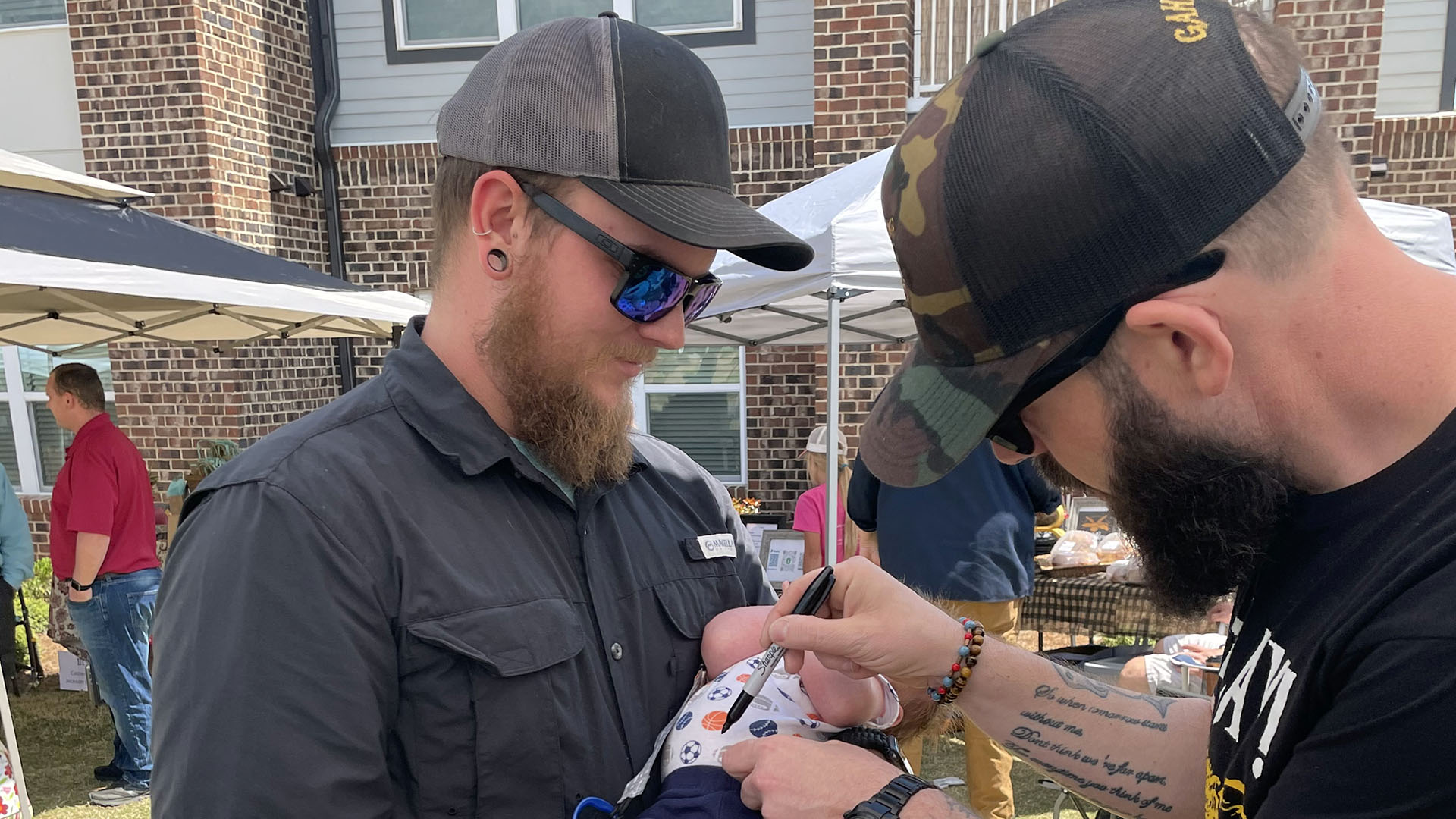 “It is pomade and we do them in different scents like the beard oil,” said Harris. “It helps to control the beard and give it more volume if you want to coif it up or smash it down some. I’ve seen such an influx in sales in that because of the COVID-19 masks. When a bearded man wears that [a mask] it’s like if you have a lot of hair and you wear a ball cap all day, when you take it off, that impression is still on there. Guys with beards will get that line like their beards was folded in half, so you take the balm and put it in and coif it back up and get it right back into place.”

“The name wasn’t hard because it’s my reaction to things I can’t believe,” said radio personality and GAHLAY! Brand Co. founder Matthew “Mattman” Harris.  ‘GAHLAY! I can’t believe that.’ It’s something you would say around your grandmother if you don’t want to cuss.”

In addition to seeing his product bought by men with facial hair, Harris has seen people without facial hair purchase his soaps and has heard of a customer using his nighttime beard oil, which has lavender in it, as a pillow spray.

GAHLAY! Brand Co. products are available in Hyped Experience and Mast General Store in Greenville as well as at gahlaybrand.com. 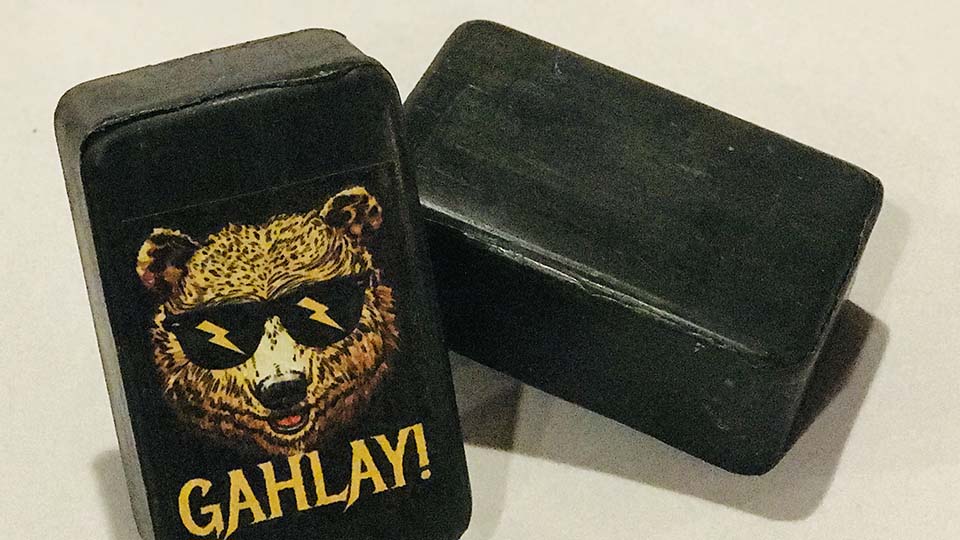