Taking a stroll through Judson Mill, the massive, 35-acre site off Easley Bridge Road that is now under redevelopment with McMillan Pazdan Smith at the helm of the design, is like touring through Greenville’s past and future at the same time.

On a cool afternoon in late April, as workers from Triangle Construction move about the site, project lead Ken Reiter of development firm Belmont Sayre stands in the ad-hoc dirt parking lot area before a spacious warehouse. Less than a year ago, this warehouse was gutted, wind passing through the many openings in its facade, but now the warehouse has been sealed with a wall of glass windows. 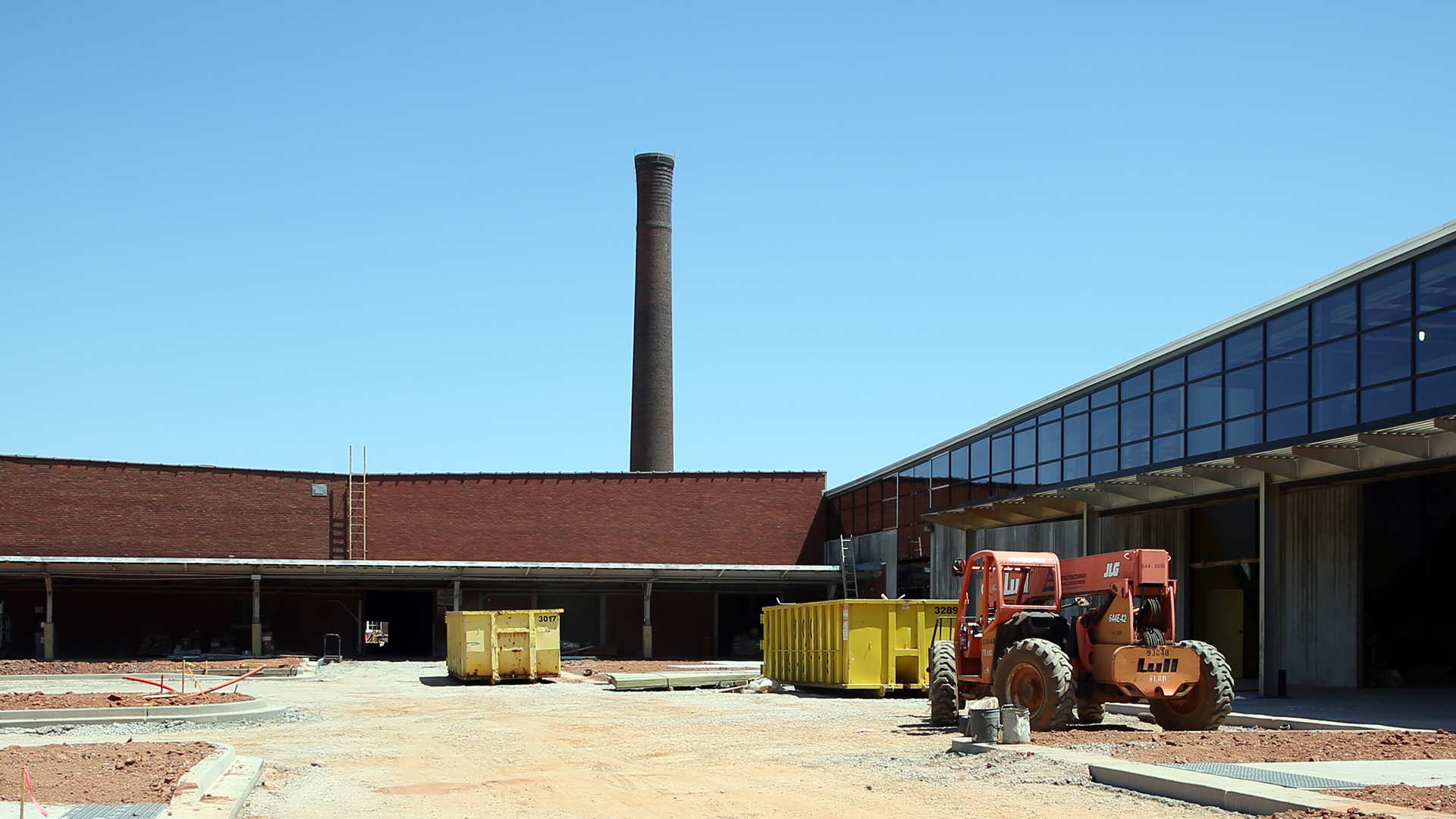 “This is the historic warehouse,” Reiter says, although he admits the “historic” designation will probably make most people feel old, seeing as it was built in the 1990s.

The warehouse, which will be entirely commercial, is just one of four buildings on the site — there’s also a mill, a smokestack and a small paint shop — the oldest of which, the mill, dates back to 1912. 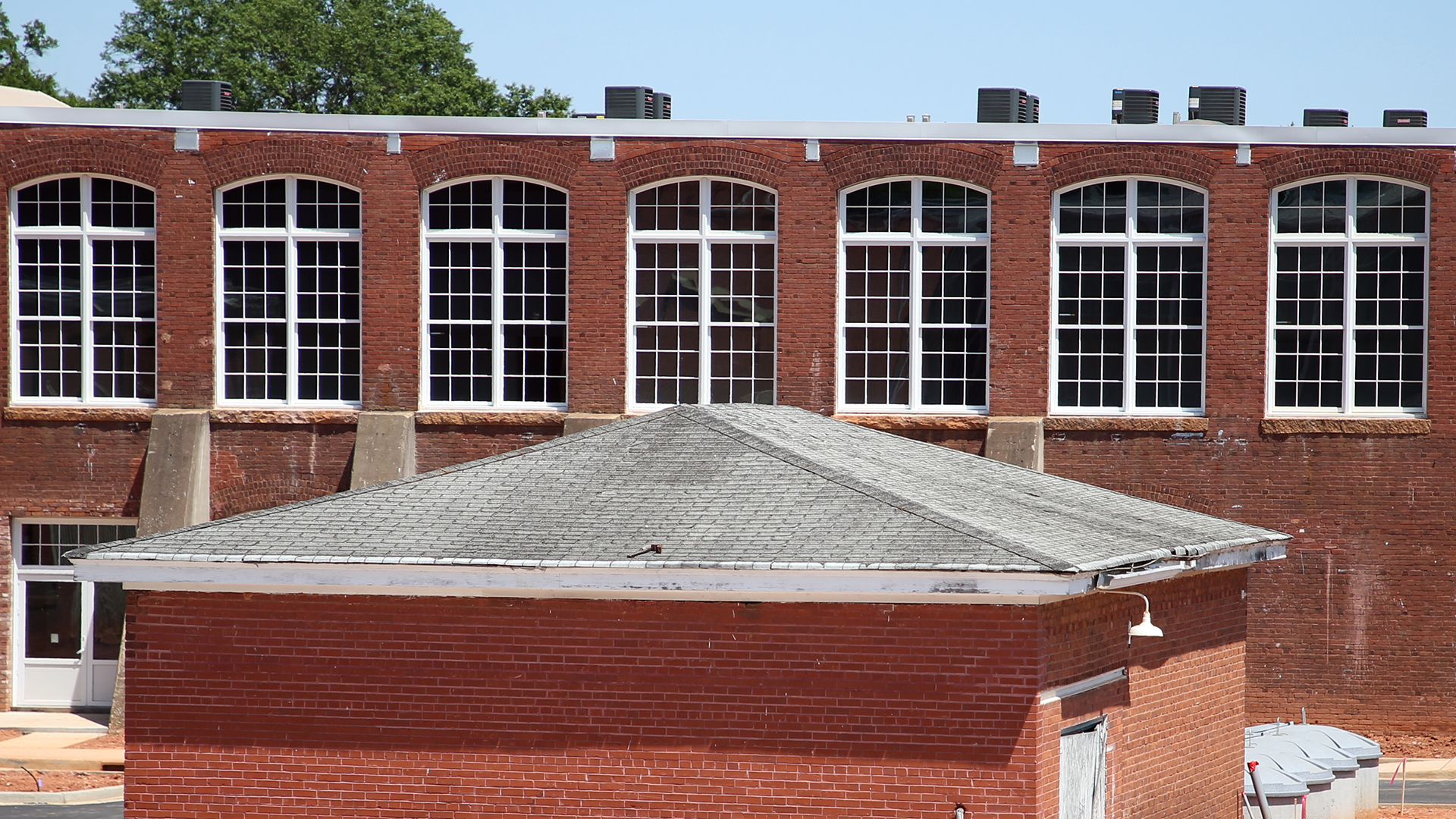 But Reiter is not biased when it comes to a building’s age. Even though the warehouse is the youngest of the bunch, he thought about demolishing it when they were in the early stages of planning the site’s redevelopment but chose not to.

“To be honest, we just didn’t know what to do with this building when we got here,” he says, stepping through the warehouse’s entrance.

It’s fair to say he could not have predicted what would eventually take up the bulk of the warehouse space. 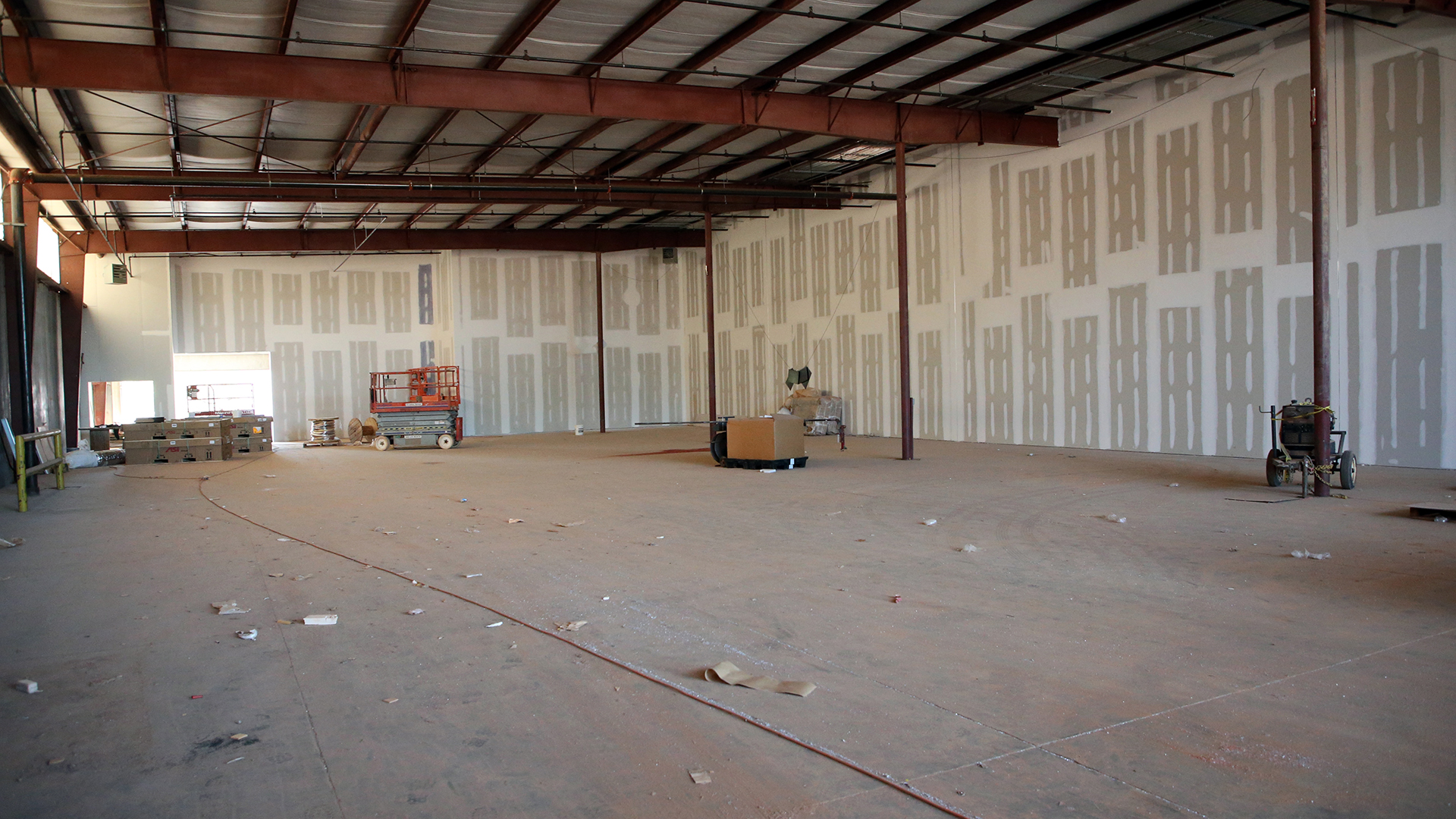 Inside, abstract blocks and strange inverted pyramids rise up toward the ceiling. The shapes distort at odd angles and are streaked with different patterns of color: brown, tan, green, yellow, white. As sunlight streams through the glass wall of windows, the warehouse space could be mistaken for a contemporary art museum.

But its real purpose is actually far more functional. 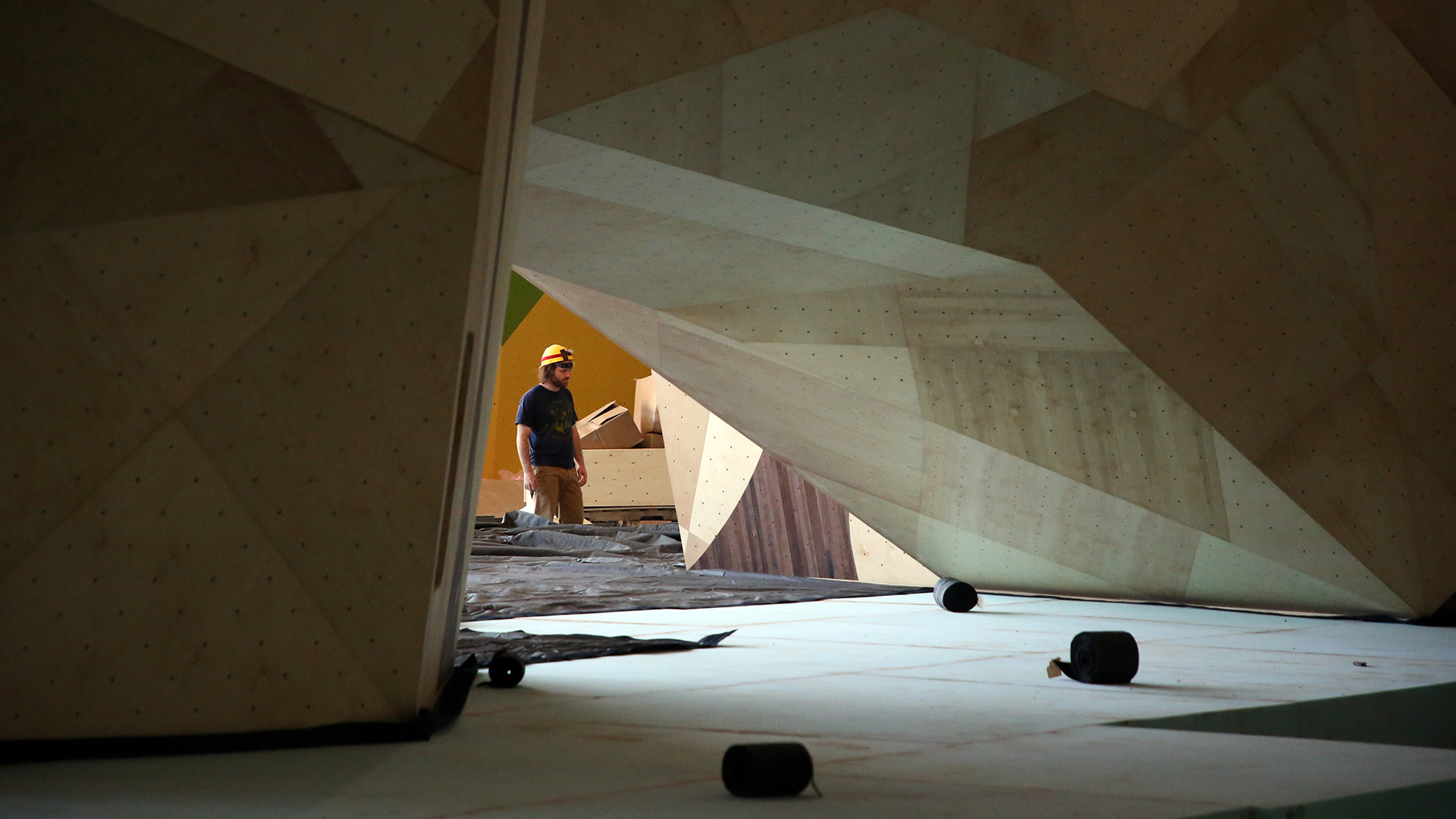 The interior space is still being fine-tuned, but by the end of May, BlocHaven Climbing is set to open to the public. Owned by Doug Johnson, the climbing gym will encompass 22,000 square feet of bouldering, rope climbing and top roping, plus a cafe and a 15-vendor retail space, along with an elevated mezzanine and observation seating to accommodate official competitions.

BlocHaven Climbing is one of three tenants in the front of 1990s warehouse space. To the right of the gym is a planned Feed & Seed location, led by Mary Hipp, which will occupy 18,000 square feet wherein volunteers and workers will provide healthy options for lower-income communities. Here, local farmers will bring so-called “B-grade produce” — the lumpy peppers, crooked carrots, ugly tomatoes and other less presentable but still perfectly nutritious produce — and workers will then process and distribute that food to Greenville Health System, Prisma Health, local schools and lower-income communities.

Stepping into the now-empty space, Reiter says, “They’ll also have a restaurant here, retail and a community education center where farmers can come in and get trained. Neighborhood meetings can happen here. It’s basically a community hub.” 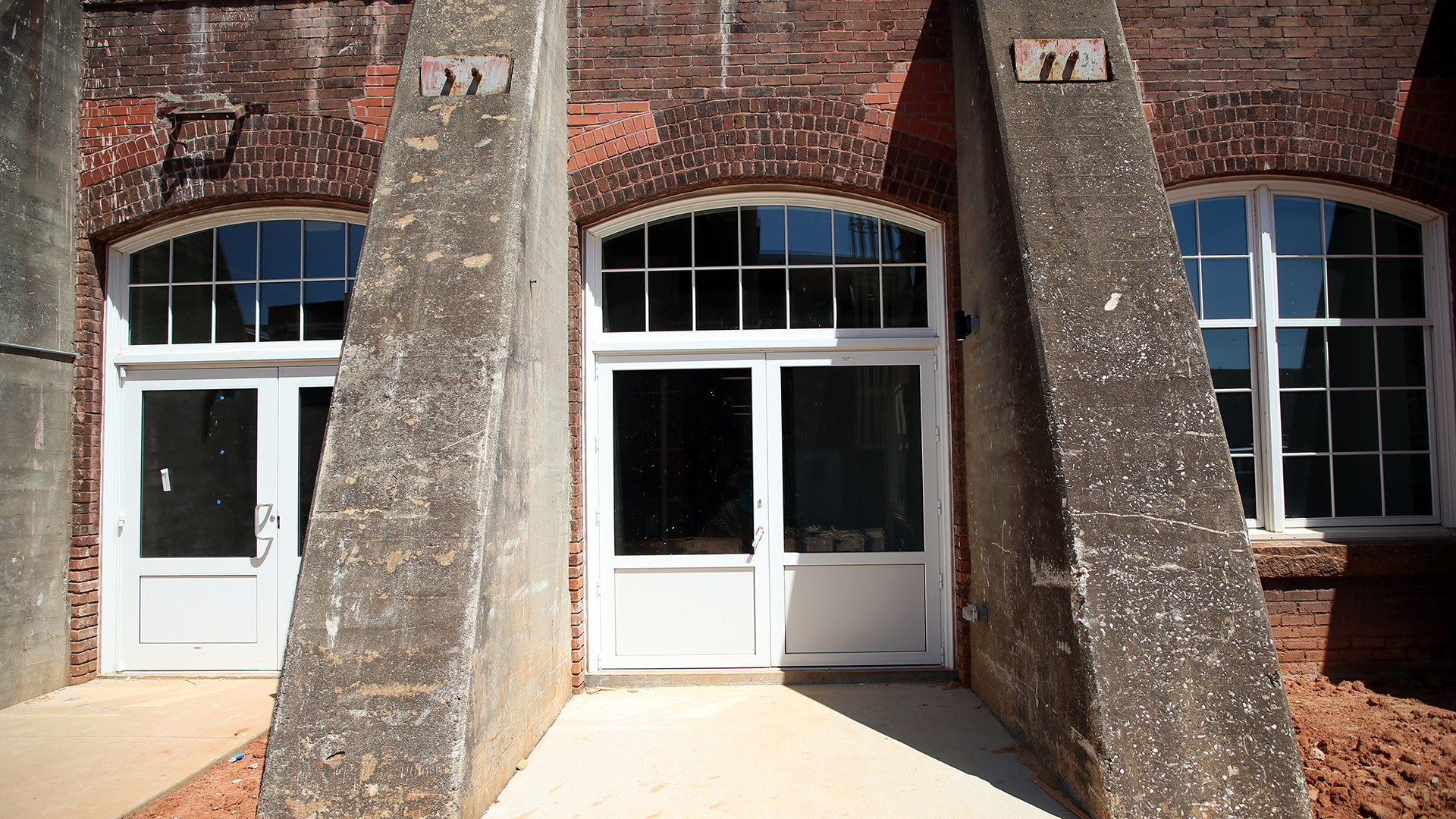 Walking out of the Feed & Seed space and back through the climbing gym, Reiter enters the third tenant space in the front of the warehouse, which will serve as Greenville’s newest country music concert venue, Cowboy Up. Run by Howard Dozier, the 10,000-square-foot space will accommodate up to 1,000 people and will feature a four-sided bar, a mechanical bull, a large stage for music acts and a style that combines rustic reclaimed wood with sleek metal. It’s set to open in late summer or early fall.

That’s just the front of the warehouse. The backside, which faces Hollis Elementary and the Judson YMCA, is a mirror image of the front, although the tenants will be entirely unique.

“You may have heard of this concept called the ‘Jud Hub,’ or the ‘Judson Hub,’” Reiter says as he steps into the backside of the warehouse.

What he imagines the “Jud Hub” will be is a collaborative workplace environment within the now-empty space that will serve as a social entrepreneurship innovation center. 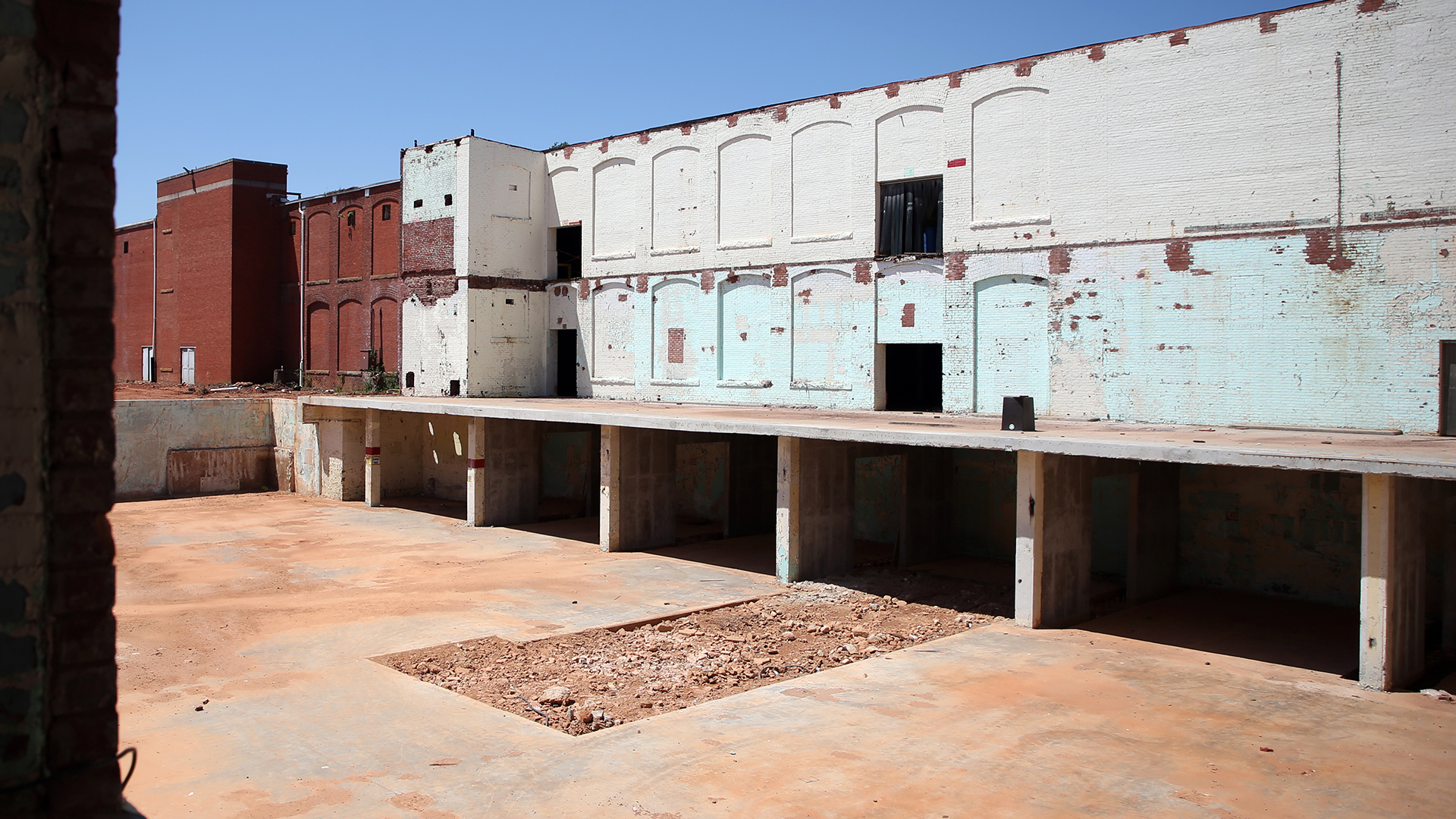 “Now, what does that mean? Well, it’s basically working with organizations that are similarly-minded and aggregating them so they’re actually collaborating and creating more impact,” Reiter says.

Unlike co-working spaces, the Jud Hub would have a dedicated program manager, attorneys, accountants, PR firms and more, all volunteering to support disparate nonprofits and private organizations trying to drive positive youth outcomes in the community.

“It’s still very much just a concept,” Reiter clarifies, “but we’re very excited about that concept, assuming it gets locked down.”

Outside, along the backside of the warehouse, Reiter walks in to the cool, afternoon air past the historic old fire-pond, once used as a water resource in case of fires at the mill. He continues walking past the mill’s smokestack, one of the four historical buildings on the site, which he hopes to transform into a restaurant concept.

Looping around, he proceeds up a small set of steps into the back of the future Cowboy Up space.

“This is the green room, where the stars will come in,” Reiter says.

As he moves through the green room space, across the site of the future stage and through the imaginary crowds, Reiter passes beneath a doorway, and suddenly he has stepped decades into the past. 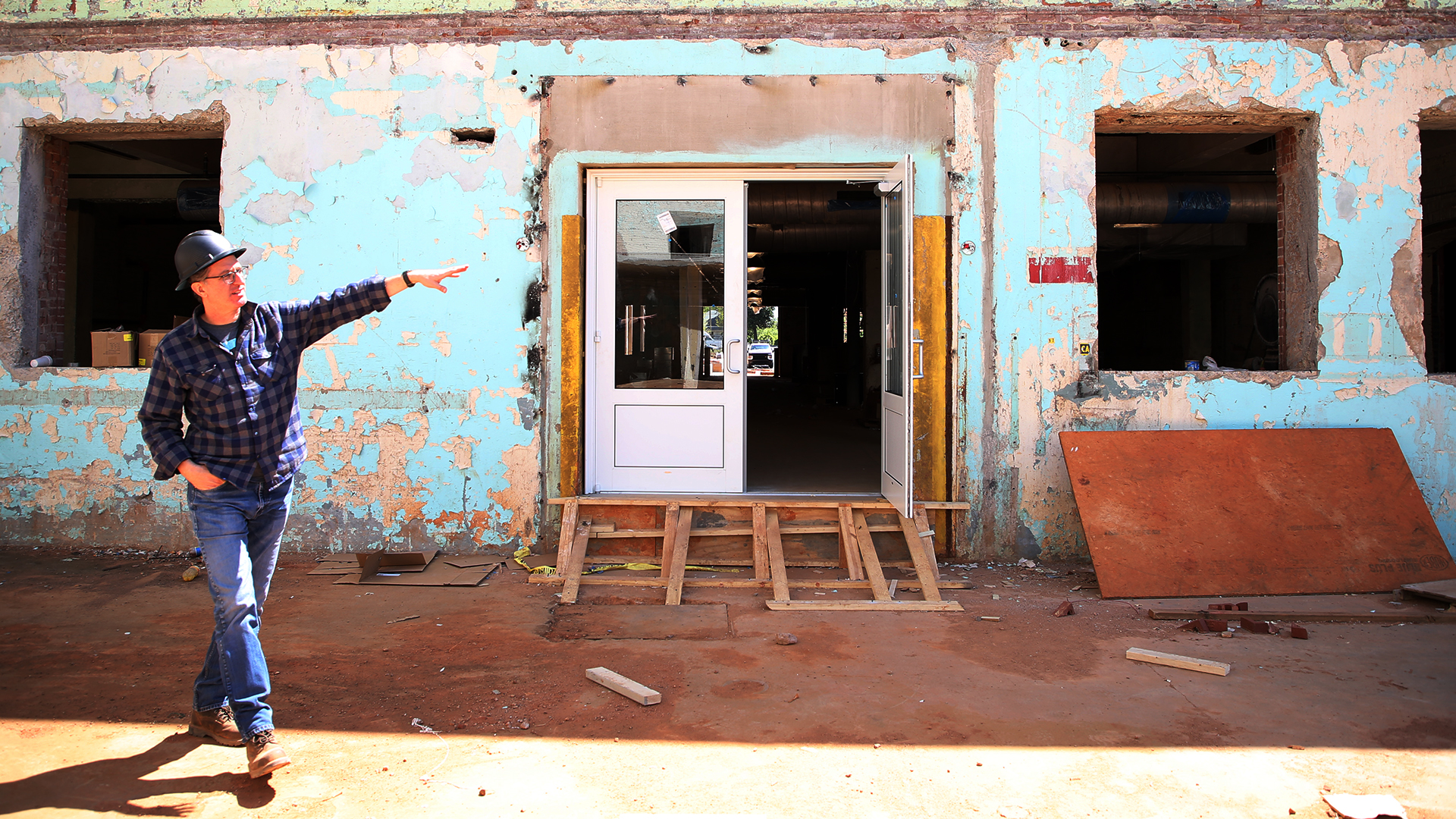 Inside the 1950s warehouse will be two concepts, only one of which, Magnetic South Brewery, has been formally announced. The Clemson-based brewery will be bringing in production facilities and a taproom with food offerings, set to open sometime in the spring of 2022. The other tenant, while still unannounced, will be “harmonious with a brewery,” Reiter says.

Between the commercial space of the warehouse and the residential space in the mill ahead, Reiter is planning 5,000 square feet of transition space where Belmont Sayre will house its development office.

Then there is the old mill building, which was built in various stages from the 1912 to the 1930s, where 204 apartment units that make up Judson Mill Lofts, managed by Greystar, are now in various stages of completion in the 120,000-square-foot space.

The age and former use of the building is evident in the high ceilings, the exposed brick hued with a soft patina of historic paint, and the large bay windows. Original sawtooth roofs allow natural sunlight to stream through the wide hallways. Although Reiter was obligated to keep these historic aspects in order to qualify for federal and state historic tax credits, he says his goal whenever taking on a project like this is to highlight the building’s past as much as possible.

“We want to accentuate these stories and let people know what happened in the space they’re in,” he says. 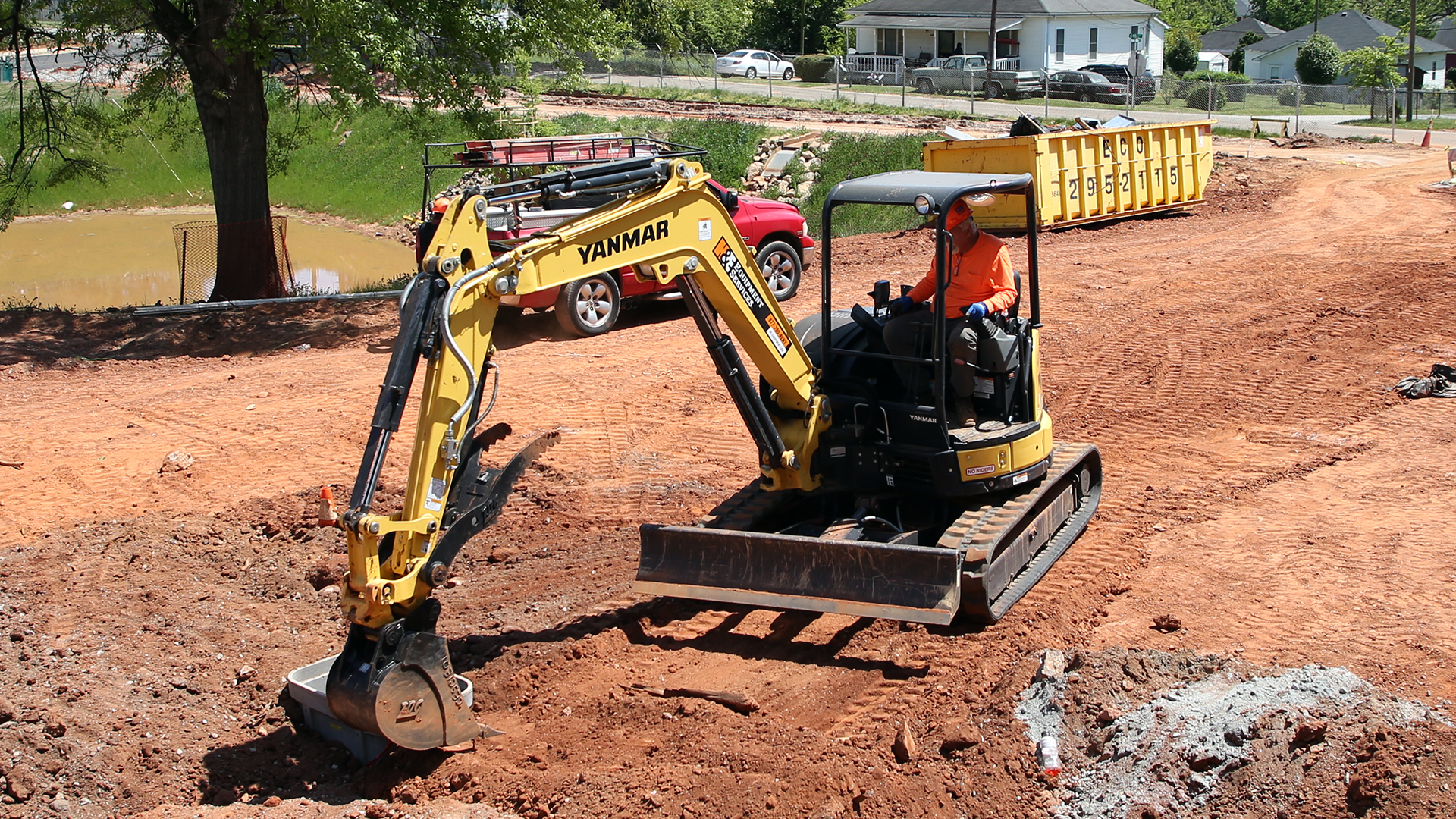 Reiter ends the tour by walking out into the back, where a large, yellow excavator groans, lifting red dirt from the ground.

“The neighborhood we’re working in here has probably heard a lot of promises along the way,” he says. “For us working here, we can see the project done in the very early stages, but it takes a lot of work to actually get it done. I feel like now is a good time to tell people it’s really happening.”

As for what’s next, Reiter says it’s the same as ever — the work continues.

“Now we want to focus on what we do to find what types of impacts people here are looking to drive forward,” he says, adding, “And what can we do to help?”