textile history. At LA’s Dolby Theatre, the Academy would like to thank the Upstate for its Oscar-worthy curtains. And if you caught Meghan and Harry’s wedding, those velvet ropes you saw? Those came from here, too — all from a mill whose looms keep humming.

“When we first started, a lot of people called it the miracle mill, just for us to stay in existence,” says Richard Heusel, who co-founded KM Fabrics, one of Greenville’s last surviving mills and one of the largest in the world producing pile fabrics.

Last March marked the 40th anniversary of the company, which Heusel ran for 32 years as one of only three presidents; the other was Bob Lewis. Today, Paul Tantillo helms the textile plant, which during World War II manufactured duck cloth, a heavy woven-cotton canvas. The 1940s-era building stands in the shadow of Brandon Mill, now apartments, and steps away from the textile-league ballpark where “Shoeless” Joe Jackson played.

“We’re one of the few textile survivors in this area,” says Tantillo, 53, a native New Yorker who joined the company from Milliken five years ago. “We’re very proud of our roots.”

Heusel, the son of German immigrants, started his career in textiles in 1957 in Louisville, Kentucky. In 1972, he became president of Piedmont Plush Mills, now a co-working space across from St. Francis Hospital.

He and Smith Hendricks, another Piedmont Plush exec, launched KM Fabrics in 1979 with $150,000 in startup capital. The name honors Heusel’s parents’ German hometown, Kirchentellinsfurt, and Hendricks’ in the Montague community near Furman University. In 1983, the company paid off its $500,000 loan on the building.

“We had some tough years, but through the years we persisted. My motto has always been, ‘Perseverance predominates,’ and it has through hard times, and fortunately, the last 25 or 30 years have been pretty good. ”

Today, nearly 100 employees and 41 looms, including four new $400,000 Belgian machines and a $1 million “finishing range” purchased in a recent multimillion-dollar reinvestment, churn out “a couple million yards” a year of velvet in the 150,000-square-foot facility.

Eighty percent of its business comes from theatrical curtaining, such as Cirque du Soleil, NASA’s Goddard Space Flight Center in Maryland, and Carnegie Hall, to name a few. KM also makes velvety-soft material to shine shoes and buff floors, as well as for ropes at banks — or the purple ones at a certain royal wedding.

“Velvet is special,” Heusel says. “I did not want to be associated with the company that did sheets and pillowcases. I mean, that’s pretty generic and not identifiable, but velvet has been around for centuries, and sometimes it’s still in good shape after over a hundred years.”

While Heusel has since retired with his wife, Gwendolyn, to the South Carolina Lowcountry and has sold his shares in the privately owned company, he and Tantillo continue looking ahead.

“I need to keep this thing going and growing in the right way,” Tantillo says. “It’s very humbling to walk in the footsteps of Richard Heusel.”

A firm’s wealth of female finesse 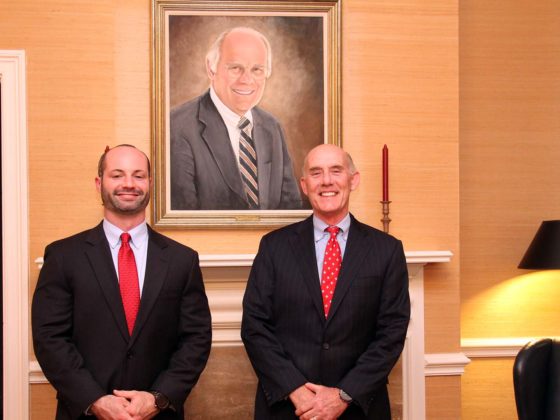