It’s a little-acknowledged truth that the opening of a hotel is unique compared to the opening of other ventures, if only because of the singularity of that event.

Any business can host a “grand” opening, of course, but few ventures other than hotels have just that one single “opening.”

“People tend to forget that once a hotel opens, it never closes,” said Dharmendra “DJ” Rama, president and CEO of Auro Hotels, which has just opened the new AC Hotel by Marriott in the Camperdown development on Main Street in downtown Greenville. “We have to be on 24 hours a day, 365 days a year.”

Adjustments can be made, of course, but once those doors open, there are no closing times when the entire staff can regroup, no lulls in the action. 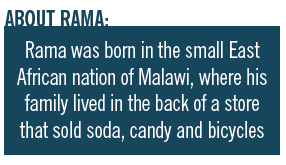 Rama likes to think of it as a movie, one that he and his team will spend years imagining, designing, drafting its major set pieces, financing, hiring the right actors and promoting with the right partners. But unlike the experience of a movie director, Rama never gets to stand in the back of the theater and take in the audience’s final response when the credits roll. Instead, it’s a constant back and forth.

“For me, it’s like watching a live, ongoing movie whenever I walk into the Paloma bar or the lobby of the hotel, and I see people’s faces, how they react while they’re using these spaces,” Rama said. “I ask myself: ‘Does it relate to the experience we wanted them to have?’”

Sometimes those reactions force Rama to ask himself significant and heady questions, such as: Do we need an extra trash can over there? Should we put a water bowl for dogs in that corner of the outdoor space? Should we add an extra few chairs to the lobby?

They might seem petty concerns for a man who just spearheaded the creation of a hotel with 196 rooms, 17,000 square feet of meeting space, a large outdoor plaza and five different restaurant concepts, all at a price tag of more than $60 million.

But if the movie never stops and the credits never roll, that means every moment is a chance to keep adjusting, Rama said, no matter how small.

“To me that’s the beautiful thing about it, that you keep on wanting to improve,” he said.

The creation of the ‘movie’

“Obviously, we believed in Greenville, number one,” Rama said. “And the location of Camperdown is what really drove us to want to be a part of this project.”

Next came finding the right partners. In the case of the AC Hotel by Marriott and the Camperdown project as a whole, those partners were already present in the form of Greenville-based developer Centennial American Properties and its president Brody Glenn, along with Alabama-based Daniel Corporation and its president Pat Henry.

“Obviously, we believed in Greenville, number one. And the location of Camperdown is what really drove us to want to be a part of this project.” – Dharmendra “DJ” Rama, president & CEO, Auro Hotels

“When you’re looking at partners, you need to find people you not only trust, but people you just like doing business with,” Rama said. “You need transparency in your relationships, and that was checked off with flying colors in our case.”

With the right partners, then came the work of drafting the “story” of the hotel, which Rama admits might sound like an odd choice of word for a physical building. Still, he insists a development needs a running theme and cohesive story in order to connect with the community. 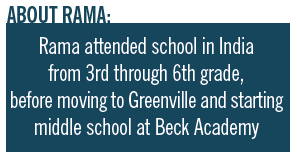 Those themes serve as the storyboard to the “movie” that is the hotel, but they cannot be enacted without the right team of behind-the-scenes crew: the architects, interior designers and brands that will tie in with their story.

“Also, it’s vital to engage the stakeholders — talk to the city, the convention center, the visitors bureau, the Greenville Arts Council, and so on,” Rama said. “Talk to the local corporations as well to understand the needs and wants of what’s lacking in the community and what we can plug in here to make them excited.”

Facility planning is the four or five months during which details are hemmed down: the number of rooms, the layout, the food and beverage concepts and the design of plaza space, after which comes the financing portion.

“Because we have to make the project feasible, at the end of the day,” Rama said.

With Synovus Bank serving as lender, the project got the green light to go ahead with construction — what Rama calls the project’s “execution.”

For the AC Hotel, it was crucial to find a local builder — in this case, BE&K Building Group — and to support subcontractors within the community. Going local not only benefits the community by keeping the money in Greenville, Rama said; it also comes with the added bonus of working with people who understand the challenges and opportunities better than an outsider otherwise might.

“After execution comes the most important part, which is recruiting leaders and staff that will deliver the experience as drafted on paper all those years ago,” he said. “And the reason that’s so challenging is because, like I said, a hotel never closes. You need the right team to keep the movie playing nonstop.” 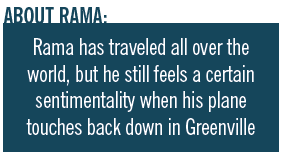 For Rama, the goal at the end of the day is to create an experience at that well-trafficked corner of Main Street. To look out one of the hotel’s windows and see children playing in the waterfall along the edge of the building, or young couples walking their dogs through the plaza. To stroll through the lobby and see diners seated at the bar, laughing and talking among themselves. To watch as workers string flowers in the restaurant space on the rooftop.

The scope of the project can make it hard to see the forest for the trees, but in those moments, the movie comes alive.

“Being raised here as a kid and coming to Main and Broad streets, you realize this isn’t something that happens often,” Rama said. “You only get so many chances to create something so monumental, something that once you build it, it’s there pretty much forever.”

Rama was born in the small East African nation of Malawi, where his family lived in the back of a store that sold soda, candy and bicycles.

“My father had a retail store and basically we had a massive jungle in the back,” Rama recalled. “Typically, snakes would crawl in from everywhere.”

To this day, Rama still knows the precise process by which a person can capture an intruding snake.

Step 1: Jump up on the dining room table

Step 2. Scream as loud as you can

Step 3: Wait for your father to come into the room, armed with a poll, to catch the snake while you and your mother watch in fear

“To today, I’m still afraid of snakes,” he said, laughing.

Rama’s family moved to Pomona California in 1973, when he was in second grade, and they lived at the Sunset Motel, where his parents worked. Those early years served as the foundation for his later career as the leader of the Auro Hotel empire.

Rama attended school in India from 3rd through 6th grade, before moving to Greenville and starting middle school at Beck Academy. That was where one particular teacher, Mrs Carter, took him under her wing and spent two hours a day tutoring Rama.

“I had been in India for three years, so my English was weak,” Rama said. “She really helped me when I needed it most, and I’m eternally grateful for her.”

Rama said it wasn’t just Mrs. Carter who welcomed him with open arms. It was Greenville as a whole.

“That generosity and respect for each other is something I saw in Greenville from day one,” he said. “I’m still impressed by the open arms of the Greenville community and how we all embraced each other and keep evolving to where we are today.”

Rama has traveled all over the world since then, an experience he said has allowed him to broaden his mind and heart, but he still feels a certain sentimentality when his plane touches back down in Greenville.

“As soon as I land in GSP airport, I feel home again,” Rama said. “Even today, driving through town, I get that same feeling I had from my childhood all over again.” 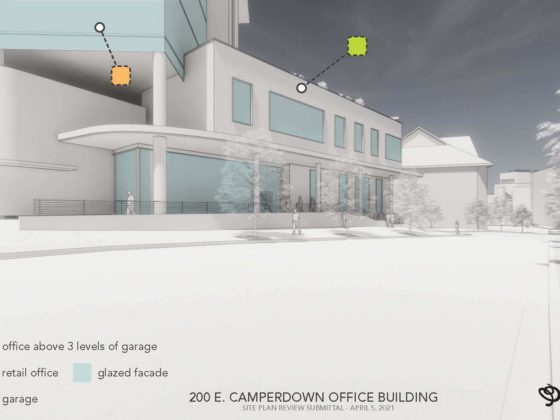 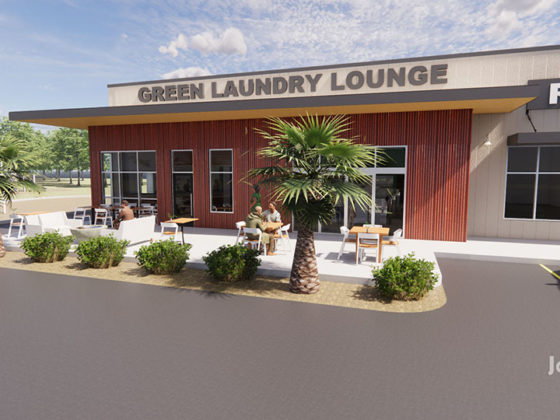